1st Associated > Rising Damp Is It A Problem

Is it a problem?

What do Building Surveyors do? 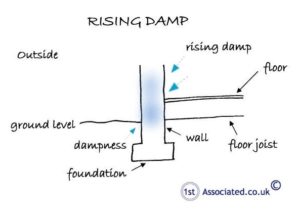 Just Google search on the internet or many of the other well known search engines such as Firefox and Internet Explorer using the term No Such Thing as Rising Damp or the Rising Damp Myth and you will open your eyes to an amazing debate on rising damp.

We thought we would do a round up of the views that we have come across and comment with our experience as building surveyors who carry out structural surveys and building surveys regularly.

Reward of £50 for anyone finding genuine Rising Damp

We came across an article entitled Property and Rising Damp – No Such Thing which refers to independent research, as far as we are aware, carried out by Michael Parrot, Manager of Lewisham's Housing Disrepair team who offered a £50 reward to anyone finding genuine rising damp. We have also seen consideration raising the reward for finding rising damp to £500. We are not sure whether it is still available but it certainly showed commitment!

The article on Rising Damp was written many, many years ago, in November 1997. As part of the article it is commented that they would like to remove the term rising damp from the building vocabulary. We would say if anything rising damp is better known today and what's more it is used time and time again to either be the reason why a mortgage is not given or the reason why a sum of money is retained by the mortgage company. It is also used as a way to negotiate down the price.

What is a damp proof course? 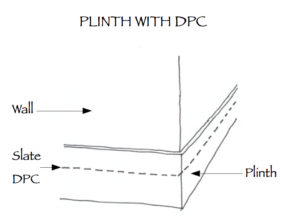 With all this fuss about dampness, you may be wondering how the dampness is stopped. Normally in modern properties, this is post war properties, it is stopped by use of a damp proof course. Originally these were slate and then they were bitumen and more recently they have been plastic (of course!).

However, prior to the war years we used a very different system and this is where we allowed properties to breathe. This is because they were often built with a lime mortar that allowed dampness to get into the wall but then also to breathe and evaporate or dissipate.

Let's talk to the Experts

The Building Research Establishment or the BRE were once a Government research resource that looked at the building industry. Generally their information is considered to be very good and unbiased. We used to say that they were considered the research specialists in the building industry but we have had comments on previous articles that they are now purely a commercial concern and there are many others available. That aside, the Building Research Establishment does say there isn't any such thing as rising damp in articles, yet equally sell a lot of books on the subject of rising damp and also have carried out research for rising damp companies. All very confusing.

The BRE Digest is a document written by the British Research Establishment explaining about damp. We have a copy if you are interested in reading it.

Let's talk to the Users

Whilst we appreciate this isn't a specialist website and has lots of opinions and there are often conflicting comments, we do think this is a great website so if you haven't visited MoneySavingExpert.com we would recommend that you do.

There is a forum section which discusses the rising damp myth at length and Royal Institution of Chartered Surveyors sometimes known as RICS and also how damp meters are not used correctly.

There are various comments which we believe are good common sense comments such as waiting for six months before doing anything, which we would say is generally a good thing with a house as nothing happens that fast.

There are people on the moneysavingexpert.com website who obviously work in the trade, who advise that they have installed damp proof courses and seen it working. There are also arguments that chemical damp proof courses are useless and others saying that they hold BBA Certificates and there are British Standards that recommend their installation.

If you search the web, there are many many views on the use of damp metres and protimeters, protimeter being the trade name used. Damp metres play such an important part in analysing dampness, (rightly or wrongly) that they are mentioned in the BRE Digest 245.

Often you will find with a mortgage company who has carried out a valuation via its mortgage valuation surveyors that they can ask that various sums of money are retained due to dampness. We have seen on most of these that they recommend you consult a damp proof specialist such as a member of the BWPDA (The British Wood Preserving & Damp-proofing Association) which are part of the Property Care Association.

There is also the role of trade institutes within the rising damp environment such as the Property Care Association. We are not certain whether they are a ‘professional company' or if they are a promotional company for the damp proofing industry.

The RICS (Royal Institution of Chartered Surveyors) is a professional body that represents the public's interests first as it is chartered and upholds standards for the surveyors within it.

What a great read this book is. Jeff Howell is an author of many books and a chartered building surveyor, chartered builder and ex-bricklayer who carried our research whilst lecturing at South Bank University in relation to rising damp and simply couldn't get the damp to rise.

The following articles give further information related to this topic:

Rising damp, condensation and damp through your walls

Rising Damp or is it?

If you are looking for commercial property, whether it is freehold or leasehold, we would recommend a survey as this will prevent dilapidations claims in the long run. You may wish to look at our Dilapidations Website at www.DilapsHelp.com an d for Disputes go to our Disputes Help site www.DisputesHelp.com , both of which we have been advised are very helpful!