1st Associated > Energy Efficiency Have We Got It All Wrong

have we got it all Wrong?

We market the services of independent Surveyors. Our Surveyors pride themselves on a high standard of work. We can offer Building Surveys also known as Structural Surveys and Home Buyers Reports. We also do Specific Defects also known as Engineers Reports or Damp Reports. We can also carry out Independent Valuations. Note these are not for bank lending but are to advise you how much we feel the property is really worth. If you have a property problem we may even already have written an article on it and we would refer you to the many articles we have on our website.

Our independent surveyors are more than happy to chat to you about your property. Please Free phone us on 0800 298 5424 and surveyor will call you back.

The above is the short title, what we really wanted to call this is: Is the government, and therefore the Building Regulation Departments of the local Councils, taking us the wrong way by specifying more insulation rather than looking at thermal mass options?

Energy used to be cheap in the 1970s we are now forever being told by the utility companies that the only way is up, isn't it interesting how they always put their prices up before winter?

Since the oil crisis in the 1970s we have focused on more and more energy efficient properties and it is probably fair to say the government has via Building Regulations with its concerns with climate change, the earth's resources and sustainability having a massive impact on how we construct our buildings to get a better thermal efficiency. But have we been steered in the right direction by the government? 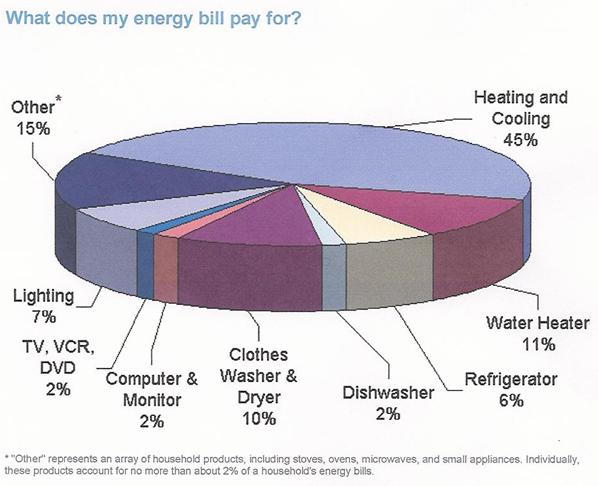 It could be argued that we have always constructed with insulation although it has not been the primary purpose of the material. We look at the different eras of property:-

Tudor/Elizabethan/Jacobean vernacular architecture was very much about building from the local materials which were readily available as we did not have transport system to move materials miles, we did in cases where major buildings were built such as castles and churches. Materials were transported partly for a function reason and partly for a status reason particularly stone. However, the majority of buildings were built from local materials which were normally timber or rubble, interestingly these materials had thermal mass properties which we will discuss in detail later on.

Georgian/Regency the large six by six buildings with sliding sash windows and grand entrances and doors with decorative fan lights over the top. These were brick or stone and gave a very palacious feel, the ceilings were becoming more commonplace which added insulation, heating was via an open fire and lighting via gas or oil or candle light we started to move towards buildings we would recognise being commonly available today.

Victorian/Edwardian there are still a massive amount of these available today, it was the start of the transport era with canals, railway and the Industrial Revolution. The standard types of housing had slate roofs, cast iron gutters, Flemish Bond brickwork, sliding sash windows, single glazed but in two larger panes. Local vernacular varieties for buildings such as the use of chalk and flint in the Chiltern area, use of sandstone known as carr stone in the Norfolk area, use of Jurassic limestone in Oxford, Cambridge, York and Edinburgh and granite being used in the West Country still nevertheless these houses consisted of settlers from the weather, heating via real coal fires in each of the rooms and commonly were relatively small inside often 12 foot square/ 3.65m². Again, the vast majority of houses used thermal mass of the materials for the way heat was retained. The landlords of the day often associated with providing housing for industry such as mills, mining etc... Remember this was the age of drainage being the latest mod con for the common man.

War Years thought about some building but our efforts were elsewhere, at the end of the war we looked a non traditional factory type buildings particularly for Local Authority housing. Many of the war factories were then being taken up by the production of building systems. Whilst they looked at building differently in the mass production in the need to house many people coming back from the war and re- house those that had been left with bomb damaged buildings and those from the general slums and squalors. Portionally they stayed fairly similar to Victorian/Edwardian houses and the focus was very much on speed with new materials being introduced. This introduction of new materials was interesting as this was the first time they had the capacity to draw materials from almost anywhere subject to the economics of it all. This resulted in non traditional housing which used lighter weight materials such as cladding panels be it concrete or metal. These properties did not tend to have the thermal mass of properties of years gone by and as a result often suffered from being cold such as the aptly namely Airy houses. Airy houses were actually named after a Minister that was involved in them gaining permission but probably was more apt as the air just seemed to pass through them and this also resulted in condensation problems where as we got the benefit of central heating systems the warm environment started to lead us towards having condensation issues.

The Milton Keynes Energy World Experiment is still going on

We refer you to our article with regard to Energy World that was set up in Milton Keynes in 1986 and ultimately ended up as the SAP rating that we now use on all properties throughout the UK when they are sold or rented out. In normal market conditions they give advice as to how to improve energy efficiency, whether anyone ever carries them out is debatable! A view has been aired that they are a waste of time and certainly do not help the sales process.

The basis of our thoughts come from if a cavity wall is such a good idea for walls why are not we doing a similar thing for floors and roofs or are we just in a different format?

Walls and insulation through the years 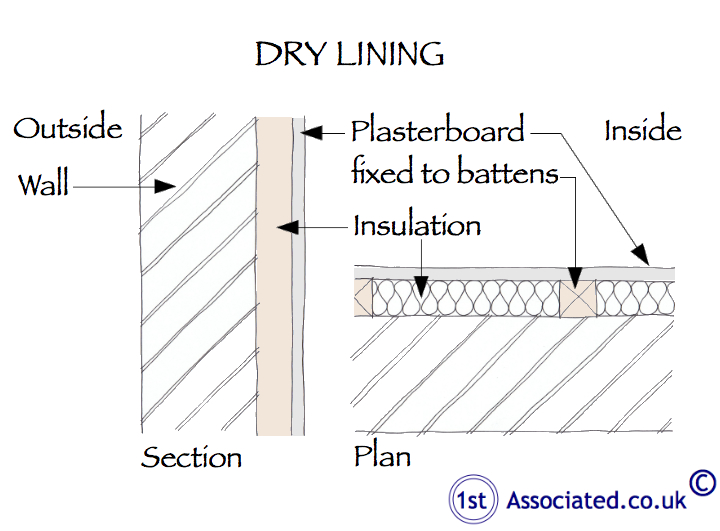 Following the war it became more common to build with cavity wall construction originally we believe that the main thing was to stop dampness penetration however it did have the added benefit of a gap between the brick outer and the brick inner wall. As time progressed the brick inner wall with tie bars remained although they had gone from being a corrosive metal to being a stainless steel or galvanised metal and today plastic wall ties are used in a blockwork wall. The stages in cavity wall development meant that the cavity was partially filled with the idea that the air gap allowed air to convect around within it with the inner wall being a block with a better thermal quality than the original brick and of course as with many things in the building industry being driven by cost. Bigger blocks and more dense blocks were used and eventually dry lining internally. None of these had the high levels of mass that an older solid brick wall would have or indeed a stone wall as the insulation was not from a mass of brickwork or blockwork as it was in two separate leaves. From our understanding the insulation reflects back the heat rather than absorbing it in a mass wall construction and then giving it back out.

Whilst on the outside the walls look quite similar apart from the brick course change or the stonework coursing has remained the same there is a cavity hidden behind this and although modern block wall behind this possibly dry lined. This is the construction sandwich that we 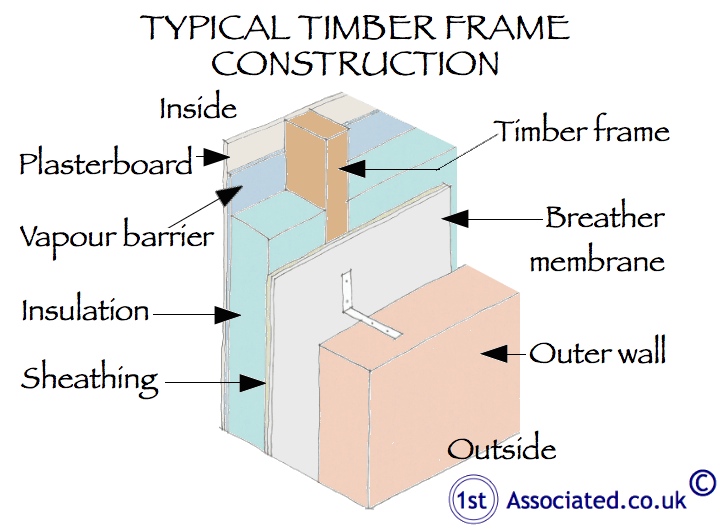 In addition to this type of wall there is one other type of wall that has been developed which is a hybrid this is where it was built as a cavity wall from the war years onwards but the cavity was not filled. It has very much been the hard sell of the insulation industry and of government that cavity should be insulated indeed the government believe in giving incentives to filling in cavity with insulation. In older cavity built insulation scenarios it was very much the case that this meant the cavity was bridged and this could pass from one side to the other. More modern cavities were advised not to do this as the insulation material does not allow this but we have not had any personal experience of this.

The insulation of roofs through the years

We still find a few roofs without any insulation at all, normally within leased properties such as public houses or older multi occupied houses such as the mansion houses of the 1920s to the 1940s or the Art Deco flats of the 1940s to the 1960s where no single person has taken ownership of such things as the roof space. However, the majority of houses we find have 150-200mm of roof insulation, sometimes it is a mix of insulation from the older almost felt like insulation or the small foam chippings we are coming across more and more the 270-300mm of insulation which we literally find very difficult to go in the roof as you cannot see the joists as the insulation is thicker than the joists which should come with a disclaimer that it is dangerous to walk in the roof. It is unfortunate that this depth of insulation can hide things such as woodworm and perhaps damp areas but is very much the norm. What we do find is that insulation in these roofs is very often blocked by the insulation with no plastic pre-formers at the perimeter eaves detail. Indeed many have literally had insulation without any thought for ventilation of the property. 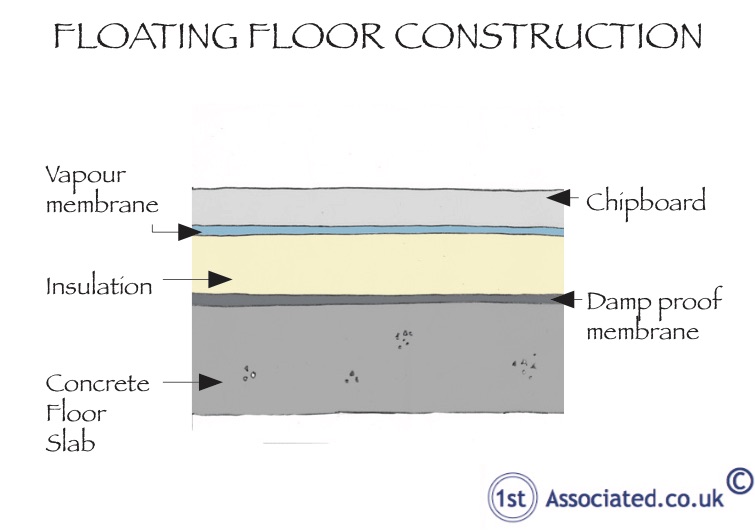 It is only in recent years that insulation in the floor has been added, we believe it is Building Regulation 1994.

All these insulation measures have been developed without thinking about thermal mass of the property too much. The advantage thermal mass gives is the fact that it soaks up excessive heat and gives it out over a period of time by this can mean over a year. Whilst it often means the pouring of large slabs concrete which many from a sustainable point of view would argue is not the concrete we should be using it does mean that we will be warm.