In China an increasing number of cities have changed their entire public bus fleets to pure electric vehicles.

BYD now has 45,000 electric buses and coaches on the roads globally.

In regards to small and large vans, rigid and articulated trucks a variety of suppliers are now offering electric models with varying range from around 100 miles for local deliveries to in the case of the forthcoming Tesla Semi truck with 300 mile and 500 mile variants.

Other commercial vehicles now available or shortly due to be include agricultural tractors, short range passenger ferries e.g crossing Norwegian Fjords, a planned electric ferry for the Thames, canal container shipping in Belgium and the Netherlands, and a number of electric prototype / training / private aircraft.

Are Electric Trucks any Good?

Using figures from the Tesla Semi truck, the vehicle will have previously unheard of performance reaching 60 mph in 20 seconds with a full load (approx 40 ton laden weight) and capable of 60 mph up a 5% grade also with a full load. As well as this with 4 separate motors each on different driven wheels, a low centre of gravity, excellent aerodynamics, superb driver visibility and many driver assist functions up to eventually full self driving, will likely be the safest and most comfortable truck ever to hit the market – all that with a sale price not greatly dissimilar to a conventional truck 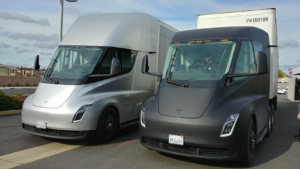